Rising Damp. It sounds like a movie title or the name of a early 90s Goth band and it very well could be. But is also a condition that at least one house (debatable) in Kitchener Waterloo has.

Earlier this year, my clients found and purchased (conditionally) an old home. It appeared to be a lovely old place in what is arguably one of Kitchener’s most popular neighbourhoods – the East Ward. Prudently, the offer to purchase was conditional upon having a home inspection done and finding that inspection to be satisfactory. Regrettably, an issue was found and the offer did not proceed into a sales agreement. The issue found might be something called ‘rising damp’. I say ‘might be’ because neither I, nor the home inspector has ever seen this phenomenon before and although I checked with a second home inspector who said it very well could be ‘rising damp’, another home inspector (from the seller’s side) would not say if it was or wasn’t but also offered up no other explanation as to what it could be otherwise.

In the case of this East Ward home, we surmised that the rising damp issue was caused by the basement renovation. In short, what appears to be the cause is that the basement walls were spray foamed from top to bottom. Homes in the East Ward are well known to have very porous foundation walls. By sealing the interior side of the basement walls, normal moisture within them has nowhere to go but up and then out the side of the house. This leads to efflorescence and spalling bricks.

What is rising damp?

Rising Damp is the movement of moisture upward through permeable building materials by capillary action. It becomes a problem if the moisture penetrates vulnerable materials or finishes, particularly in the occupied parts of a building. This moisture will dissolve soluble salts from the building materials such as calcium sulphate, and may also carry soluble salts from its source. If the moisture evaporates through a permeable surface, these salts will be left behind and form deposits on or within the evaporative surface. Where there is a large evaporative surface, salt crystals are deposited as a harmless flour-like dusting on the surface. If evaporation is restricted to localised areas such as defects in an impermeable paint finish, then salt deposition is concentrated, forming thick crystalline deposits with the appearance of small flowers; hence the term ‘efflorescence’. When evaporation occurs within the material, salts can be deposited within the pores. The expanding salt crystals in these locations may result in fractures forming in the material and spalling of the surface. This type of decay may be seen in porous brickwork or masonry.

Here are some pictures from the home inspection 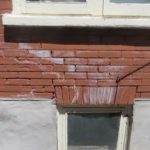 If this is not rising damp, my question is, what is it?

Other readings one, two