According to the Canadian Mortgage and Housing Corporation (CHMC), Canada’s housing regulator, Canada’s housing market is going to cool in 2016 and 2017. Both new home construction starts and resale homes sales (in some markets) will slow down.

Besides Waterloo Region’s, diverse and growing local economy, as Toronto home prices continue to rise, more and more first-time home buyers and investors look to the region for their housing needs. Things are solid here and are predicted to stay that way for the coming years.

Also, as the tracks for our new LRT are laid, there is a lot of excitement building in Kitchener Waterloo about our future.

Look at the price of new houses! (click to enlarge) 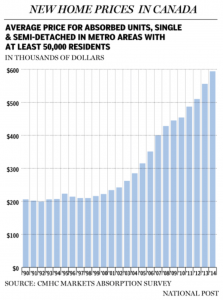