Here are my predictions for the end of the year.

It’s only three months till the end of the year. That’s right, in the world of real estate and most businesses really, most of December does not count. Not much business gets done in the last two weeks of December.

The fall real estate market is already ramping up. I already can tell that there are more listings, more showing and that means more offers and more deals to be done in the closing months of 2015.

Here’s what is going to happen in the next 12 weeks.

I’ve already seen this start to happen. Yesterday morning (at 11:30) I was out showing houses with a new client. There were five houses on the list, all new on the market in the last three, four days. (We had booked them all the evening before). Before we even set out, I had a text that one of them had an offer registered. Before we were finished, there was an offer in on another that was subsequently sold today. One of the houses without an offer really stood out and I am sure it will be sold, but they are not accepting offers until Monday (who’s competing?)

Inventory continues to be in short supply

It’s a seller’s market. It has been for a while, a long while, but it especially is again now. Yes, I know the varying degrees of sellers’ markets – the good, the bad and the downright ugly.

We forget that the inventory of homes to buy expands and contracts at different times during the year. Homes get listed in the early spring, get sold in the mid to late spring and then during the summer latecomer homebuyers pick over the leftovers. The second wave of inventory, a smaller (but more interesting one) is heading for us now. Inventory will expand, buyers will buy and then things will settle down again.

Eventually they will go up, but clearly that won’t be anytime soon. We are good till the end of the year.

In Kitchener Waterloo, high rise condo owners have learned that it is easy to buy but harder to sell. Those who have bought high-rise condos in (say) the past five years who now want to sell, are surprised that they cannot attain what they thought they would (or were told they would) in terms of appreciation. They are also competing with four brand new condo high-rises in downtown Kitchener. First time condo buyers and investors typically would rather buy new than used.

The “this month over same month last year” numbers that the real estate boards love to put out always show prices rises of 4, 5 or 6, 8%. Prices are going up. That’s the fact, Jack.

The Region of Waterloo is growing. Like it or not, we are on the map now for Toronto area young families who are looking for affordable homes and better lifestyles. New Canadians, downsizers, investors, and new graduates who previously might have moved away, are buying homes in Kitchener Waterloo.

I’ve had two clients from Alberta buy homes in KW this year. I didn’t have any Alberta clients last year, or the the year before that. Maybe its a coincidence. But I don’t think so. 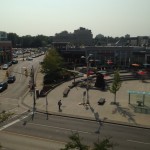 The core will outperform the inner suburbs

Lots of people want to live in the city centres. Generally, between Weber and Westmount, Columbia and Ottawa is the hot zone. A desire for walkable neighbourhoods, the LRT, the GO train, the Iron Horse Trail, Google, the Tannery are all reasons stated.

Written By
Keith Marshall
More from Keith Marshall
A financial levy made by lawful process against those specific parcels of...
Read More