You have lots of choices when it comes to good schools around Waterloo Region. There is a tendency for people relocating here to want to live in the #1 top rated school zone. When we moved here we chose Empire School for that very reason. It was #1 back then and now it is #2. However, schools are only one aspect of choosing a new home for your family.
Neighbourhood is also very important. You might want to be near the city centre, as I do, so you can walk to a movie theatre or grocery shopping. You may want to be in a quiet residential area where the kids can walk to school or ride their bikes along the trails and quiet roadways.
And then there are homes. Some new neighbourhoods have wonderful new homes that make sense to young home buyers. If you want an open concept main floor, walk-in bedroom closets and an ensuite, then a new home may be best.
You’ve visited Fraser Institute so you know the names of the best schools around the region. Neighbourhoods usually reflect the quality of schools, so great schools are often surrounded by great neighbourhoods. It is only the home styles that change.
When you decide that relocating to Waterloo is a likely possibility, we can spend an afternoon and go on tour of a couple of homes around schools that you are interested in. That’s an open invitation.

Some of the best school, neighbourhood and house combinations in my opinion in Kitchener Waterloo are the homes and neighbourhoods around these schools :
Abraham Erb
Brigadoon
Edna Staebler
Empire
JW Gerth
Laurelwood
Lester B Pearson
Mary Johnston
Sandhills

In part one I will talk about the first four on this alphabetical list.

The school
Abe Erb is a JK to grade 6 school located in the very popular Columbia Forest/Clair Hills neighbourhood. The school gets top marks. According to the Frasier Institute, the school rates a solid 7 in the most recent five years. That is pretty great for a new school.

The neighbourhood
Many people, including myself, love the topography of this neighbourhood. There are rolling hills, walkways and ponds replete with geese and other water birds. The neighbourhood is only about ten years old. Most of the houses were built between 2003 and 2007, but there is still building going on.

The homes
In terms of the price of real estate, in the past 12 months there were 88 sales reported through our local MLS. The prices range from $210,000 to over $1.4million.

Condo sales
Last year 10 condos sold in the neighbourhood. The prices ranged from $210,000 for a one bedroom, one bathroom 600 to 800 square foot unit to a little bigger 2 bedroom, 2 bathroom unit in Reflections at Laurelwood

Brigadoon in the Doon, Wyldwoods and Pioneer Park neighbourhoods

The school
Brigadoon is one of the top ten rated schools in Waterloo Region. It’s ratings in the most recent five years is a very respectable 7.3, and it ranked an 8 as of the most recent Frasier Institute rankings.

The neighbourhood
The school’s catchment area is a bit of a ketchup splat, covering a bunch of dissimilar neighbourhoods. There are some really great homes built onto the rolling hills that roll through the neighbourhood. In the south, the area is new. The houses are average size to very big. In the centre, the houses were built in the 80’s so you get some nice raised bungalows on large lots with mature trees.
It is also a great neighbourhood if one (or more) spouse works in Cambridge or Toronto direction as it is easy to get onto the 401.

The homes
There were a lot of homes sold in the Briagdoon Catchment area last year, but it is a big area (and a hard one to map). 135 homes sold in the past 12 months through KWAR – the Kitchener Waterloo member of MLS.

Condo sales
There are 3 main groups of condos. Old Huron with its new stacked condos, Pinnacle with it’s newish condos and Doon Valley Drive with its 55+ executive condos. At the low end you can get a 750 square foot 1 bedroom, 1 bathroom unit for as little as $170,000. At the high end you’ll pay about $450,000.

Freeholds
The freehold townhouses that are in the Brigadoon catchment area start at $270,000. For that you get three bedrooms, two bathrooms and a garage. At the other end of the price scale, there are some nice big modern homes selling for $750,000-$800,000 that have 4 bedrooms, 4 bathroom, finished basements and maybe even a swimming pool. 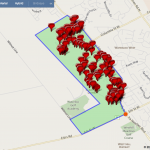 The school
Edna Staebler is only in its seventh year but already it is well loved by not only the teachers and staff, but also by its students and parents. It ranks better than average according to Fraiser with a 6.2 rating in the most recent five years.

The neighbourhood
The neighbourhood is very popular with young families. It is very similar to the Abe Erb School zone (above) but is a little closer to shopping and transportation.

Condo sales
There aren’t a lot of condominiums in this neighbourhood. Most of the condos that sold are located at 555 Chablis Drive. They are very nice units generally selling for $280,000 to $310,000. You get 3 bedrooms and 2 or 3 bathrooms for that.

Freeholds
If your budget is in the $270,000s or $280,000s you have many options. You can buy a townhouse, a semi-detached or a single detached home in this price range. For that, you will get a small place, less than 1500 square feet with 3 bedrooms and 2 bathrooms. There are also homes in the neighbourhood that are close to 3500 square feet with four bedrooms and four bathrooms selling for above $650,000.

The School
Empire School has long been one of the most highly rated and most loved schools in Waterloo Region. When my kids went there, it was a nice little school with a good French Immersion Program. Since then, it has had a couple of large additions added onto it – gym and a “portapack”.

The neighbourhood
I have lived within this school boundary since 2000. The neighbourhood is well established and steeped in history. I’ve written about it many times before so I won’t go into a lot of detail again.

Next time, in part two I will talk about:

These are my other top school/neighbourhood/home combinations.

Last week on 365 things to do in Kitchener Waterloo, we jumped the hills of Mount Trashmore (also known as McLennan Bike Park). We…