Should I buy a house this year or should I wait? This is a question potential homebuyers ask themselves all the time. Well, if you live in Waterloo Region or are relocating here, the answer is buy. Here’s why.

News from the Hamilton Spectator and big bank BMO say that Waterloo Region will out-preform most of Canada this year in term our economic output. Whereas the outlook for most of Canada is “cautious”, this part of Ontario and particularly Waterloo Region, says BMO Financial Group, is much more optimistic. The Canadian economy as a whole will take a hit due to lower oil prices, but here in the region we will benefit from the lower Canadian dollar, lower fuel costs, strong local construction activity and a strengthening US economy. 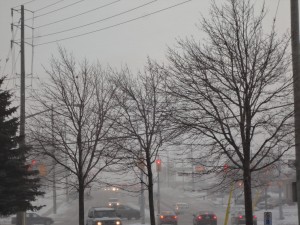 Looking down Weber from Chapters

Industry
In other parts of the country (Alberta and Newfoundland) the economy is slowing down – due to dropping oil prices. However in Kitchener Waterloo, innovation and technology with manufacturing built on research and technological development have made us resilient to the supply and demand of the oil industry. We have a diversified economy.

Housing
In Calgary this month, sales are down by almost 35% and listings are up by nearly 43%. This will put a lot of downward pressure on prices.
In Kitchener-Waterloo, 2014 saw an increase of more than 4% in the price of single-detached family homes. The number of homes sold was also up (by about 3%) in 2014.
Of course, interest rates are as low as they can go and will likely stay low into 2016.

Debt
Waterloo Region has a triple-A credit rating. Since 2000, Moody’s Investors Services has given the region that rating every year. The triple-A rating allows us to borrow at the most favourable rates. The region is spending a lot of money, (LRT) but we are well within the provincial guidelines for debt.

Should I buy a house this year or should I wait?
If you live in Kitchener Waterloo or are relocating here, you should buy a house. If you wait, you will only be one more year and thousands of dollars further behind.

The world according to Garth
I’ve stopped reading Garth Turner. After crying wolf for a decade and a half I’m sure he is smugly proclaiming himself a prophet and an oracle, and a real wise man, but hey I’m still right. Back in 2014, when he commented (#180) on my posts, he said,

“It’s different in Waterloo. Who would have imagined?”

We all know that it is a seller’s market. That means that some sellers and their agents are pretty smug, a little cocky and…