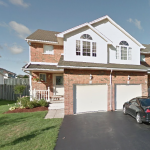 I was out yesterday with another client looking at condos. We were looking at townhouse style condos not more than ten years old and we ended up spending four hours together looking at units from Upper Mercer Street near the newest bridge over the Grand River to Avens Street in Waterloo’s “next great neighbourhood” – Vista Hills.

What we found was 1400 to 1600 square foot condo townhouses ranging in price from $280,000 to about $320,000, with condo fees less than $100/month (they will go up). That is very affordable for many people and a great way to get into the market, have a comfortable home in a good neighbourhood and build up some equity.

I read somewhere recently that 51% of the people living in Toronto were not born in Canada. That’s amazing. We live here so we often forget that Canada is the country of immigration. It is the something about Canada that makes us unique in the world. It is also something that is effecting our housing market in a great and positive way.

When I first got into real estate, I’m embarrassed now to admit that I was anti-condo. I wrote that the lifestyle portrayed in the marketing was hiding the reality of living in a little concrete box and paying through the nose for inept property management companies to pick up the garbage and clear the snow from the sidewalks. I was mostly wrong. Condos have more than just a lifestyle appeal. It is how much of the world lives and as Canada’s urban centres continue to grown, condominium living is driving our housing market.

Too many condos? Maybe too few condos says CIBC

An article last week in the Huffington Post says:

Canadian immigrants have increasingly been coming from the 25-to-45 age group, the people most likely to buy homes.

The client I was out with yesterday was an investor from Toronto. He has had three rental units in Toronto but like many investors is looking to KW for his next purchase. He wants something that is a “hands off” investment that he can buy and hold and as it appreciates will pay a small dividend.

Waterloo Region and the change around us

In the fifteen years that I have lived in Waterloo Region, it has transformed itself from a pretty sleepy place (stable but boring) to an economic powerhouse. Visitors always comment how much things have changed. And they have.

The two major drivers of this change are

1) Industry has shifted to high tech

2) The universities and college have grown

In both cases, that also means that we are adding younger and an increasing number of non-Canadian born residents to our cities. As mentioned above, many of them would rather live in a new condo than an old house.

Is it a good time to buy a condo?