2017 Update: We haven’t heard any complaints about the dump smelling for quite some time. You would think with the new Costco not to mention the popularity of the Boardwalk, and more people potentially smelling the landfill, it would be more in the news and on the grapevine. But it isn’t. Looks like the region solved whatever the problem was.

Yesterday on one of my favourite subreddits someone posted the following:

Hi! My husband and I are looking to buy a house, and we’re interested in the Westvale neighbourhood in Waterloo. The only thing that has us apprehensive is the potential for stanky dump stench to waft by our (potential) house.

Is there a generally-accepted “cut-off” line for where you can or can’t smell the dump any longer? Anyone have any experience living in Westvale? If so — can you smell the dump? All the time? Just on particularly bad days? Does it keep you inside when it’s bad? Thanks in advance.

It is a great question. After all who wants to smell the dump? The answers were good too.

In Westvale they smell it:

It has some pretty bad days for sure, I’ve definitely smelled it on that side of Ira Needles a few times before but I think anything East of that western side of the Westvale drive loop you would be safe from it.

I bought a house in Westvale that is a couple hundred meters in from Ira needles. You can smell it at times. Probably 2 days I noticed this year that it was bad enough to close windows. It only happens in the evening for a few hours.

I live in Laurelwood (about 3-4 km north of Westvale). We get the smell about 3-4 times a year. It depends on wind and weather.

And in Clair Hills: 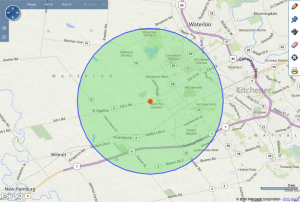 So how close is too close?

I was working with a homebuyer a couple of years ago who told me that she read a study and would not buy a home within 6 km of a landfill site due to health concerns.

Of course the closer you are the greater the impact of the stench, potential ground water issues, vermin, garbage truck traffic and of course the stigma of living near the dump.

I went to google to see if I could find the answer to this question but I could not find the study that my client was referring to. Personally, I think 6 km is a little excessive. Here’s what it looks like on a map. That is most of Kitchener Waterloo!

Westvale started building in the late 1970’s and most of the homes were completed before 1985. It continued slowly after that and then Westvale had a second growth spurt starting at about 2005. The newest homes are closest to the dump. About half of Westvale is within 2 km of the dump.

It is more impacted by the dump smell as the wind tends to blow in from the west-northwest.

1) It is well laid out with Westvale Drive as the ring road and all the little crescents and cul de sac running off it. It is a real “family neighbourhood” where kids can ride their bikes to visit friends and people walk their dogs after dinner.

2) It has good and popular schools. Resurrection, Holy Rosary and Westvale.

3) It is close to shopping and everything else along the Boardwalk, including coffee shops and movie theatres

4) Easy access to the Universities, uptown Waterloo and downtown Kitchener, and out of town via Ira Needles to the Conestoga Parkway.

5) It is a mature neighbourhood now with nice tree-lined streets.

6) They have a really good community association.

2017 Update: We haven’t heard any complaints about the dump smelling for quite some time (years!). You would think with the new Costco not to mention the popularity of the Boardwalk, and more people potentially smelling the landfill, it would be more in the news and on the grapevine.

Looks like the region solved whatever the problem was.