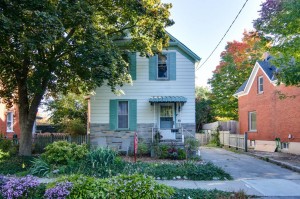 Make your home in UpTown Waterloo at 82 Euclid Avenue. This home, steeped in local history, is one of the oldest homes (if not the very oldest) on beautiful Euclid Ave, just steps from the shops and restaurants of UpTown Waterloo and the expansive parkland of Waterloo park. Three generations have lived in this home believed to be built on the site of the former Seagram horse racing track.

Having only one owner since 1958, this home has been very well cared for. The home has a new furnace (2008), and a new roof (2005). 82 Euclid features a large country kitchen with private access to the small, cozy and secluded flagstone backyard, and main floor laundry attached to a three piece bathroom. The lot is beautifully landscaped “English garden” complete with a flagstone pathway leading into the fenced side and backyard. Like the neighbourhood, the yard is replete with mature maple, oak and spruce trees.

Back inside, upstairs, the second floor is perfect for a young family with three bedrooms and a four piece bathroom. Charming with last century features, 82 Euclid has ample sized bedrooms with large closets.

There is parking for two cars but your family will likely only need one (or maybe none at all) as you can walk nearly everywhere from here. According to Walk Score, 82 Euclid has a score of 83 and is considered “very walkable”. Most daily errands can be accomplished on foot. Be that a trip to the grocery store, LCBO, barber shop, movie theatre, pub, park, church or cafe, they are all within less than a 20 minute walk. Specifically, some of the retailers and other businesses include: Starbucks, Valumart, Oasis Joe’s Barber Shop, David’s Tea, Honey Bake Shop, the Huether Hotel, Symposium, Beertown and the new Carl’s Jr hamburger restaurant, several banks, bookstores…even a hardware store. There are actually 47 restaurants within a 15 minute walk of 82 Euclid Avenue. From here you can walk to Thai Bistro in Belmont Village and Vincenzos and the Bauer Kitchen in midtown.

For the kids, 82 Euclid is near Waterloo Park with its mini-zoo, sports fields, playgrounds and splash pad.

For the older kids (young adults) the home is within easy distance to Wilfrid Laurier University and University of Waterloo.

You can also walk to major employers like Waterloo City Hall, WLU, UW, SunLife and the Grand River Hospital from here.

Public amenities in the neighbourhood include the Waterloo Public Library, Skatepark, Waterloo Public Square and Waterloo Swimplex…Tennis courts, soccer fields, baseball diamonds, there is even a cricket pitch.

82 Euclid is well inside what the City of Waterloo is calling “station areas” – the neighbourhoods around future LRT stops – the areas most impacted by our soon to be here light rail.

It is also on the the Iron Horse Trail, making for an easy commute by foot or bike south into downtown Kitchener or north through Waterloo Park to the University of Waterloo and the David Johnson Research and Technology Park.

If you have to drive, the expressway is about ten minutes away.

What can I say about UpTown Waterloo? It is the be all and end all of Waterloo Region. It is the jewel in the crown, the quintessential and all important reality of where we are going. UpTown is the tops. It’s the Tower of Pisa. It’s the smile on the Mona Lisa.

Read: What’s it like to live in UpTown Waterloo

Empire School has long been one of the top schools in the region. It is a nice little school with a new addition and it has French Immersion.

Our Lady of Lourdes is ranked but the Frasier Institute as Waterloo Region’s top Catholic Elementary School.

More from the blog about living in UpTown

Where is the best place to buy?

A guide to UpTown condos

How will the LRT affect property values?