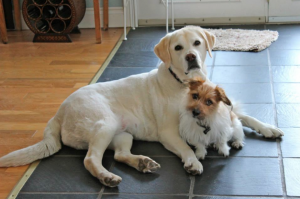 I had a call the other day from a colleague in Cambridge. She just had a deal fall apart because of a dog, a little white and tan Jack Russel terrier to be exact. Eight years old, about 12 pounds, smart as anything. The deal was for a condo and the terrier was superfluous. The condo rule is that one dog is fine, two is too many. Little Jack put the potential condo owners one dog over the limit.

I told my colleague, “Just tell them to hide the dog”. Once the owners are in, what’s the condo board going to go, evict them from their own home? Change the locks? Shame and shun them.

Probably the last one.

The irony is that when the condo units were being sold off by the developer, there wasn’t a “one dog rule”. The original owners could have as many mutts as they wanted and some condo unit owners still had two. But those dogs were now grandfathered in. When one died, he couldn’t be replaced.

My colleague from Cambridge argued that new owners with two dogs should have the same rights. They too should have their dog duo household, their multiple mutt menage grandfathered in.

I was getting my haircut at Oasis Joe’s in Uptown Waterloo and my barber had a similar issue. He wanted to buy a condo unit in a new building over in the Belmont Village area. He wanted to buy it as an investment, but the condo board has a rule. They are trying to encourage owners over tenants to live in the building. Owners, after all, take better care of their building’s things. There is a stronger sense of community. Owners live there longer. The condo in question has a 10% rule. No more than 10% of the units in the building can be rented. My barber was trying to figure out before he bought if the building had reached 10% and what would happen if he bought and rented anyway. The property management company couldn’t help. They didn’t know. The condo board was due to meet in a month, but my barber wants to buy now.

As we used to say in Taiwan, “Zemma ban, eh?” What are you going to do?


There are a lot of disadvantages to condo living. I’ve written about them before. It is a lifestyle choice, but it is a pretty good lifestyle. My first home was a condo on the 15th floor of a 15 floor building. I’d get in the elevator and go straight to the top, up to where the air was fresh and clean.

I’ve long been unhappy with the way condos are marketed. Developers and their salespeople are more like retailers than realtors and that is a bad thing for a twenty-something wandering in off the street all jazzed up by the hype. But that is another story.

Note: There is a ten day cooling off period when you “sign on the line” for a condo unit.

Having said that, there are lots of advantages to buying a condo too. It is a cheaper way to get into the market. In Kitchener Waterloo, you can’t buy much house for $230,000 anymore. Maybe a little bungalow or a tiny storey and a half in one of KW’s first suburbs. Nice, but you can get a shiny new one-bedroom unit in uptown, midtown or downtown for the same money and live the life. That’s fabulous. And you can build up some equity and then mature into your next home – a house in Laurelwood.

There was an interesting article in Maclean’s magazine the other day. It was a little over the top, pointing out a lot of the possible pitfalls of loft living. The article was a shock and awe campaign making the argument that living in a condo can be a living nightmare. Growing up in the suburbs, my family subscribed to Maclean’s magazine for years and years. I don’t remember them being quite so shrill.

But it is a good read. Here is the link.

Buying a KW condo, what to watch for

If you are thinking of buying a condo, (and I think you should) here in KW there are some great ones, both high-rise and townhouse style.

There are also some condos that you should avoid too. Some are new and have issues and some are old and have issues. Issues like rusty galvanized re-bar and crumbling concrete in high-rise balconies, ice forming in rutted paving stones becoming an insurance issue for owners, cladding coming off, the wrong windows used in a factory condo conversion project, leaky pools, health risky hot tubs lead to high fees and special assessments. The devil is in the details. Make sure you have a good realtor by your side when you decide to buy.