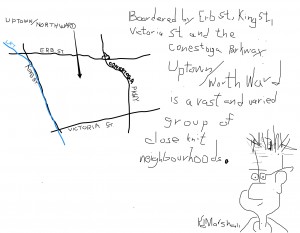 I like Laurelwood. It’s got modern houses, a great school and its near both nature and shopping. Laurelwood is a great place to raise a family.

But suburbia isn’t for everyone. There is a big move across North America back to the cities. There are a lot of people who shun the suburbs, wanting to live closer to the urban core, where there are shops, galleries and parks, where the festivals happen, where the trees are higher than the houses.

This blog post is about the Uptown/North Ward real estate area (0114) of Kitchener Waterloo.

From the large stone and brick homes of the Mary Allen neighbourhood to the single story bungalows in the Breithaupt neighbourhood, from the new condos in UpTown Waterloo to the almost 100 year two storey homes on the edge of downtown Kitchener, Uptown/North Ward is a diamond in the rough, an undiscovered gem and an area that will appreciate well as Kitchener Waterloo quickly evolves into a city.

Mary Allen Neighbourhood – The other UpTown

John, Herbert, Allen, Mary, and George Streets comprise the heart of the Mary Allen Neighbourhood. With close proximity to UpTown Waterloo, shopping, great public transportation including the future LRT, large employers like Sunlife, and the Grand River Hospital, this urban enclave has long been a quiet and unpretentious favourite place to live.

In terms of transportation, UpTown/North Ward is unbeatable. The LRT will run down King Street – the west side of the neighbourhood – connecting it with Downtown Kitchener and Cambridge to the south and UpTown Waterloo, the University of Waterloo and Northfield to the north.

On the corner of King and Victoria, the Inter-model transportation hub will be a meeting place for the LRT, GRT, Via, GoTrail, and Greyhound.

By car or bus, the neighbourhood of UpTown/North Ward is bordered by some of our most important roadways: King, Weber, Lancaster, Erb, Union, and Victoria.

By bike, the old railway spur line into UpTown Waterloo is being converted into a biking and walking trail, much like the Iron Horse Trail. In fact, when completed, the “Spur Trail” will connect with the Iron Horse Trail and the trail that runs north through Waterloo Park and past the University of Waterloo.

Depending on where you live in UpTown/North Ward, grocery shopping is within an easy walk to ValuMart in UpTown, Vincenzos near the Bauer Kitchen or the Central Fresh Mart across from KCI. Uptown also has all retail including banks, hardware store, sports and bike shops, health and beauty shops, spas, barber shops, a book store, restaurants and bars. Near Vincenzos there are high end retail outlets for eyeglasses and home decor. Along Lancaster Street, two of my favourite restaurants – the Public Kitchen and Bar and Kypreos are located.

Parks and Other Amenities

Woodside – the childhood home of Mackenzie King, Breithaupt Park with its wading pool and wooded area, Don McLaren Arena, Breithaupt Community Centre and downtown Kitchener’s Victoria Park on your doorstep are all other features of this neighbourhood.

3 reasons why UpTown/North Ward is better than Laurelwood

1) You can walk/bike or bus into either downtown Kitchener or Uptown Waterloo in minutes.