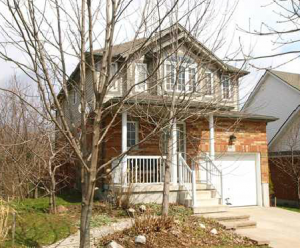 Named for Columbia Lake near the University of Waterloo, the community of Columbia Forest is a suburban neighbourhood backing onto the greenbelt surrounding the Waterloo Region. Part of the Laurelwood neighbourhood, the area was originally settled by Mennonite farmers. Edged with forests, lakes, and streams, this tranquil, planned community is mindful of maintaining the rural values of the farm and forestlands surrounding it, while providing residents with recreation amenities and transport options to the business and downtown centres.

Walkability of the Area

Since its construction through the ’00’s, the Columbia Forest neighbourhood has attracted amenities such as shopping plazas, cafes, gas stations and banks without losing its semi-rural character. Recreational opportunities abound: Situated on Columbia Forest’s western edge, Laurel Creek Conservation Area is an ideal green space. The conservation area offers 4.5 kilometers of forested hiking trails, camping and picnic spots, and the jewel of its crown: a swimming lake open to windsurfers and boaters. In the winter, the same geography plays host to cross-country skiing and pick-up hockey games. Laurel Creek runs through the 600-acre reserve. With the Laurel Creek Nature Centre offering interpretive nature walks and talks to students and families, the site is a green oasis that preserves the heritage of Ontario’s wilderness, conveniently located in the Columbia Forest neighbourhood. Opened in 2011, a new Stork Family YMCA and the John M. Harper District Branch Library on the corner of Laurelwood Drive and Fischer Hallman Road in Waterloo feature a four-lane lap pool, recreational pool, a fitness centre, multi-purpose rooms, a gymnasium, a track and family change rooms.

Grand River Transit provides daily bus services to and from uptown/downtown and the business cores and between Columbia Forest and the University of Waterloo. GRT operates the Mobility Plus service for those requiring boarding assistance such as wheelchair users and the elderly. This year, work starts on a light rail system that will link the cities of Waterloo, Kitchener, and Cambridge. This is a long-term, environmentally sustainable solution to deal with the region’s growth to maintain the character of the area while offering green options for commuters.

Opened in 2004, Sir John A. MacDonald Secondary School, home of the Highlanders, combines dynamic sports programs with advanced placement programs and an active student club scene.  The school fosters social responsibility through its Building Bridges program, placing student volunteers in community soup kitchens, and reaching out across the globe with awareness and fundraising walks, dinners, and film screenings. It is one of the top ranked secondary schools in Waterloo Region.

Named for author and journalist Edna Staebler, the Edna Staebler School is a K-8 school working to develop a safe, respectful school community and raise future leaders. At the YMCA, Kindergarten After School spaces are available in the daycare’s junior and senior kindergarten program in coordination with Edna Staebler.

The regional population has grown 6 percent in the past three years,  in part due to a high tech manufacturing boom. The area is becoming known as an Intelligent Community, with four local universities and colleges driving innovation in business and technology. As a result, average family income in Waterloo is slightly higher than that of the rest of Ontario, at $75 000. The median Waterloo real estate prices are on the rise, from under $200 000 in 2003 to just over $300 000 in 2013, according to the Kitchener Waterloo Association of Realtors; the current average list price of Columbia Forest real estate is slightly higher, at $388 000. In 2013, a homeowner with an average assessed property value of $323 000 will pay $3,908.56 in total property taxes.  Columbia Forest, due to its close proximity to the universities and the high tech business located near Columbia Street is home to many young families employed in the high-tech sector.

Winterloo (formally Ice Dogs), running this year from February 15 – 17,  is a family-friendly weekend festival that has run for 11 years. Dog sled races, ice sculptures, hands-on arts and crafts displays, skating, and a chilli cook off are all traditions that attract thousands to “Winterloo” every year.  The Sun Life Financial Jazz Festival is another free family activity that brings 35,000 people out each summer to enjoy up and coming and established jazz performers. Sun Life Financial also sponsors the  Waterloo Busker Carnival, which celebrated its 25th birthday last year. At this busker festival, jugglers, magicians, and street performers of all kinds regale crowds at the Waterloo Public Square.

The Kitchener-Waterloo area is also home to a number of German settlers, which is unsurprising, given Kitchener’s former name of Berlin. Undoubtedly the biggest and most famous of festivals, the annual Oktoberfest and Thanksgiving Parade offer nine days of entertainment to the 700,000 people who flock there every year. From “Stein and Dine”, the premier culinary event of the year which pairs German food with local beers, to the Miss Oktoberfest coronation, Oktoberfest brings in upwards of twenty million dollars for local businesses and non-profits, and introduces the region’s heritage to youngsters and newcomers alike. The Kitchener-Waterloo Oktoberfest is the largest Oktoberfest celebration outside of Germany, and is a can’t-miss event for anyone in Waterloo Region.

Like every other Canadian community, an aging population means advanced care planning is a major concern. Columbia Forest is located 15 minutes, or 10 kilometers, from St. Mary’s Hospital, one of Canada’s most highly recommended hospitals, according to a National Research Corporation Canada (NRCC) report rating patient satisfaction for 2011-2012. Revera, a national leader in elder care, operates a long-term care facility in Columbia Forest, housing seniors and individuals needing assistance for daily living. The facility is engaged in outreach with area schools, building bridges between the generations and a lasting sense of community.

Considering a move to Columbia Forest? Located in the greenbelt west of Toronto, the character of the community blends rural appeal with urban amenities. Schools, recreation centers, parks and libraries offer an excellent array of family friendly options, while retirees and elders will find an inclusive, stable community.  The festivals and events that take place year round make this a wonderfully diverse, welcoming place to live. Please call or email with your comments and questions. I love it when I can help a family find a comfortable home in great neighbourhood.

Written By
Keith Marshall
More from Keith Marshall
Because of lower property prices and the easing of U.S. marijuana laws...
Read More