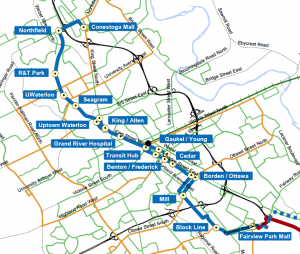 How will the LRT affect Kitchener Waterloo’s property values?

I always advise my clients to buy a home in a good school zone (Rule #91). Not only do homes near good schools appreciate at a better than average rate in relation to homes in other neighbourhoods, school ranking is also correlated to crime rate (good school = low crime, bad school = high crime).

With the construction of the LRT, I recommend to all of my clients that they consider buying along the future LRT line. I’ve been operating under the assumption that this huge addition to the Waterloo Region’s mass transit system will increase property values nearby. I base my assumption on the fact that I lived in Taipei during the construction and opening of the MRT and I witnessed firsthand how property values were impacted – my in-laws sold their home for much more than I could have imagined a few years before. I’ve also spent some time in Vancouver, visited several condo and townhouse sites along the Skytrain lines and saw again how a great public transportation system can impact neighborhoods.

The LRT will affect property values in three somewhat different ways, one negative and two positive.

Second, there is an economic transfer that gives one location a relative advantage over other locations, attracting residential and commercial development that would otherwise occur elsewhere in the region. This means one area gains at the cost of another; a sum zero gain.

Third, availably of transit also increases overall productivity by reducing total transportation costs for vehicles, parking and roads and providing a catalyst for more clustered development patterns that provide economies of conglomeration, which can reduce the costs of providing public services and increase productivity and improve accessibility and network effects. Although these productivity benefits are difficult to quantify, they can be large: just a few percent increase in property value, a few percent reduction of parking costs, or few percent increase in business productivity in a community and total hundreds of millions of dollars. This means that the LRT is good for Waterloo Region as a whole.

But what about house values?

There have been several case studies. The data clearly shows that property values near a rail station are impacted (positively) to a much greater degree than those farther away. Property values in Washington DC, Atlanta, San Francisco, New York, Boston, Los Angeles, Philadelphia, Santa Clara County, Portland, and San Diego all increased by being located near transit stations.

Research about the relationship between transportation systems and housing prices goes back to 1846 to a survey conducted to determine the impact of London’s rail lines on poor, working class districts of the city. It found that weekly and monthly rents in districts along the train lines rose from 10% to 25% as result of their proximity to public transit stations.

Studies from the United States and Canada have generally shown a positive average relationship between proximity to transit stations and neighboring housing values:

Another study (Bajic 1983) shows an increase of $2,237 for homes in Toronto’s Spading neighborhood, which were near subway stations

(Votive 1993) reports an increase of 6.4% for homes near Philadelphia’s train stations

(Benjamin and Sirmans 1996) reports a decrease of 2.4% to 2.6% in housing price for every tenth of a mile from a Washington D.C. Metro station

(Baum-Snow and Kahn 2001), a multi-city study analysis, finds that moving from three miles to one mile away from a transit station creates a rent increase of $19 per month and a housing premium of $4,972; and

Both the positive and negative impacts of transit systems can vary through time. One study of Chicago’s Midway line revealed that, in the three years before its construction, the Midway Line increased values of homes within a half mile of proposed stations by 17%. A follow-up study showed that, from announcement in 1983 to 1987, the proposed Midway Line increased home values within a half mile by 4.2%, from 1991 to construction in 1996, it increased home values by 19.4%, but, then, post-construction, from 1997 to1999, home values fell 9.8% within that same half mile distance. The post-construction drop was attributed to both the realization of negative externalities and the potential deflation of what was believed to be an artificially strong market in those areas surrounding the transit stations.

Another study showed similar increases of 31% within a half-mile radius and 10% within a half- to one-mile radius in an analysis of vacant parcels surrounding the proposed Westside expansion of the MAX light rail system in Portland, Oregon.

Hedge against the economy

Buy a home near a future LRT station — within two kilometers is good, one kilometer is better. The areas that are best effected by the LRT are neighbourhoods in the cores of Waterloo and Kitchener (Uptown, Westmount, near the Grand River Hospital, Victoria Park, Civic District, East Ward…). On the high end, Colonial Acres (near the Conestoga Mall) always a good buy just got better and on the low end, the Kingsdale neighbourhood (near the Fairview Park Mall) will improve greatly in value with the access to the LRT. 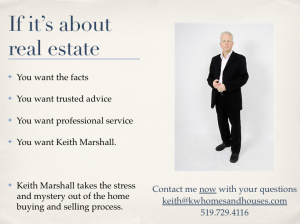 Please contact me if you are relocating to Waterloo Region or moving within the region.

Read: How much does it cost to live within a ten minute walk to a LRT Stop?

Written By
Keith Marshall
More from Keith Marshall
I was out yesterday with another client looking at condos. We were...
Read More