If you’re moving to Kitchener Waterloo and greater Waterloo Region area there are likely a number of things about the living here you’d likely like to know. First of all, I should say I’m always available by phone and email to answer your questions. Please call or email and ask.

Most people who are moving here from outside of Waterloo Region are looking for information on schools, crime, neighborhoods, things to do, house prices, where to buy a house, finding a place to rent, jobs and the general economy. Let’s talk today about some of those things starting with schools.

Where are the best schools in Waterloo Region?

Every year for the past four years, I have been blogging about schools. I like to look at the five year trends. The Fraser Institute and the EAQO rates and ranks schools every year. Basically the results show that the best schools are in Laurelwood, Beechwood, Westmount.

Where are the best schools in Waterloo Region?

Where are the best Neighborhoods in Kitchener Waterloo?

One of my 365 Rules about Real Estate (download the book FREE after subscribing to my website) is “Buy a house in a good school zone even if you don’t have kids”. The reason? Because houses in good school zones appreciate at a higher than average rate. Good schools = good neighborhoods.

Earlier this year, I sat down and built a large spreadsheet with what I think are the most important factors to consider when buying a house. They include both subjective and objective factors: neighborhood, walk score, closeness to the expressway, school ranking, stability and outlook, ambiance, traffic, amenities (both public and retail), noise, smell, and house style and quality.

Some of these factors are contradictory. For example, if you like to live near a conservation area, your walk score won’t be very high (although you’l have lots of opportunity for walking.)

Anyway, in a general way, the exercise of building the spreadsheet really clarified for me the best neighborhoods – the ones that would appeal to most of the people, most of the time.

Where is the best place to buy a house?

I discovered that high crime often correlates to low school ranking. If you’re moving to Kitchener Waterloo you should know that good schools = low crime.

I’ve offended people many times by saying publicly that I wouldn’t buy a house in this or that neighborhood. The link above tells by omission where not to buy a house. There was also a discussion online that I copied that adds alto of insight to this issue. A couple of times a year discussions like this one pop up on Reddit.

Is Jansen Avenue a nice place to live?

Things to do in Kitchener Waterloo

When I first moved to Waterloo Region in the year 2000 I thought there was not much happening here. Really we’ve come a long way in a short time. We have lots of festivals and events, wonderful public facilities, great international restaurants, parks and trails…you name it. I started a community website called 365 things to do in Kitchener Waterloo. It’s one place, of many, that you can familiarize yourself with what’s going on and what to do. If you used to live here or if you’re moving to Kitchener Waterll

365 Things to do in Kitchener Waterloo

House prices. Will they go down?

Understanding house prices and what’s going on in the real estate market is a passion of mine. Many people hear on the news that this or that is happening but we know that real estate is local and our local economy is strong. So what’s happening?

Currently we have a balanced market, which is good after so many years of sellers having the power. But it’s an unusual market as well (at least for me). I good house, priced right sells fast (and often with competing offers) and a house that is priced incorrectly or has some problems (even cosmetic ones) will sit on the market forever.

Back in February I wrote a post about this:

When is the best time to buy a house?

Employment, renting and the economy

Last year there was a story in the newspaper stating that Waterloo Region has the second best economy in Canada. We have some great employers and industries: insurance, education, high tech, transportation, and manufacturing. The region has always been able to replace an industry in decline with a growing one. Over the last 200 years we have moved from furniture manufacturing to textiles to electronics and consumer goods and automotive to high tech.

We have more than 500,000 residents and are increasing every day. We are the 10th largest metropolitan area in Canada.

We have a very tight rental market and the best place to find a place to rent is on Kijiji. 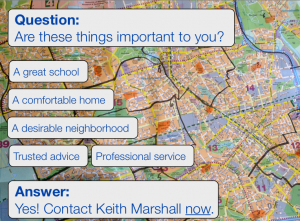 If you are moving to Kitchener Waterloo and would like to work with a Realtor who understands schools, homes and neighborhoods, please contact me. I’d love to help.

Tags from the story
crime, finding a place to rent, house prices, jobs, moving, neighborhoods, schools, things to do, where to buy a house
0
Facebook Twitter Pinterest
LinkedIn Email