There’s a Van Morrison song called “I’d Love to Write Another Song”. It starts like this.

I’d love to write another song

But nothing seems to come

I’d love to write another song

To carry me along

Make some money, pay the bills

Keep me busy too

The song comes to mind as I list 515B Weber Street North for sale. It’s a property my wife and I have owned for about five years. I didn’t mean to buy it. I wasn’t looking for another investment property. 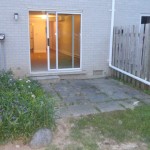 What happened was, we owned the property next door (515A Weber Street North) and I was in one weekend putting in a new living room floor. I’m pretty handy. I’ve learned a lot by being a homeowner. I’m the kind of person who likes to have reality conform to me (rather than me conform to it), so I’m constantly doing renovations and improvements. I’m also a property investor and landlord and since I’m a real estate agent with a flexible schedule I can do most of the work on my properties by myself. I have a list of electricians, plumbers, roofers, landscapers and various other connections that I call on for the important work. I do the grunt work. I’m the unskilled labourer.

Anyway, I was packing up from installing the new floor in A and the guy in B is walking out at the same time and he says…

He says, “Well you’re obvious the landlord from next door and my uncle owns this one and he told me that he would sell it when I moved out.”

“Let’s have a look”, I said. It needed a lot of work, but the price was right, so after consulting with the missus, I bought it.

That was about five years ago.

I really like this complex. I never had any problem getting tenants. It’s a nice setting with lots of green space, a new playground and a swimming pool! The condo fees are low and the building is well constructed, the grounds well maintained. Every unit has parking for two cars and the location is great for a lot of things: Chapters/Starbucks (at Weber & King), University of Waterloo and WLU (down Albert), Blackberry, the Beer Store, the Conestoga Mall and the now being built Northfield Landing – a major LRT stop with offices and shopping – I should really hang on to this unit till this is built. 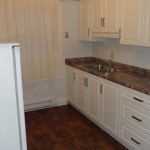 The unit itself is perfect for newlyweds, a small family, a couple of friends or a single person. As I was working on the unit over the last few weeks, getting it ready for sale, I kept thinking to myself, “I’d like to live here. It would be perfect for me. I’d put my exercise equipment in the basement. (It’s finished). I’d have my office in the front bedroom and the master bedroom is huge – big enough for loads of furniture, and it has two closets.

But alas, I’m married with children and won’t be able to enjoy the condo lifestyle for another decade or so.

This is a great unit. I hate to let it go. But back to the Van Morrison song, I have to make some money and pay some bills. It’s kept me busy, but I have new inspirations.

Where: 515B Weber Street North, Waterloo