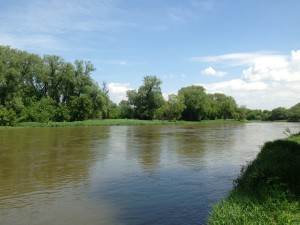 It took me years to find Kaufman Flats. It’s not on any maps, at least not any Google maps. It’s one of those local places that if you have a dog, kayak or canoe, you hear about from time to time but never can find without the help of a local – someone who has been here longer than you.

I’ve been in Waterloo Region now for almost exactly twelve years. We arrived in early June 2000, fresh off the plane from Taiwan. I still recall my first impressions of Kitchener Waterloo and wondering what there was to do in this town, wondering if there were any Mongolian bar-b-que. restaurants, Chinese bubble tea shops or local and ongoing things to do.

At least there was a Starbucks!

After living the previous ten years in a city with a population well over five million, how could I, how could anyone be happy living in a place of less half a million and spread over such a large area?

This was going to be challenging.

I remember we rented a car in Toronto and drove down the 401 to Kitchener Waterloo. Like many people arriving for the first time, we drove straight up King Street. From the 401, I noticed the green rolling hills of Ontario. I noticed the Schneider’s sign (the wiener beacon) off the 401 and that Ontario drivers drive well over the speed limit. I reasoned that we must not have speeding cameras like we had on the highway in Taiwan.

One year in Taiwan, I got eight speeding tickets. They came in the mail at regular intervals with a fine, a big red chop mark and a photograph. The photographs always showed me, wearing some striped night market shirt, happily breaking the law. I’d open the mail, look at the date and the shirt I was wearing and I’d send off my $15 fine.

The first year living here was challenging. The second was too. But slowly we found favorite restaurants and things to do. New restaurants opened and new things to do sprung up. In truth, Kitchener Waterloo has changed a lot  in the past twelve years and often when I hear people complaining about nothing to do I’m tempted to pontificate and sometimes I do.

So where is Kaufman Flats? In fact it’s nothing special and it’s easy to miss but if you’re looking for something and you can’t find it, it makes you want to find it all the more (like a TV remote), I found it by trail and error, happenstance, persistence and by chance. I asked Bob, who’s lived here all his life. It is here.

Written By
Keith Marshall
More from Keith Marshall
The year is 1862. The French attack Mexico, deciding to conquer it...
Read More